skip to main | skip to sidebar

Although I have been trying out new recipes in the kitchen for quite some years now, I started cooking full fledged meals only after I got married. Though not a novice in the kitchen, I certainly had some trouble initially estimating and cooking the right portions/servings for the two of us. Most of the times, D thought I had either invited people over or was not planning to cook for the next few days :-). Back then, I really didn’t like to eat/serve the same food for consecutive meals but also didn’t want to waste the leftovers. So, I would dump them in a plastic container in my refrigerator and we would call this a 'well' :-). After I had enough leftovers in the container, I would add some boiled potatoes, finely chopped onions, green chillies, cilantro and few other seasonings, mash them all up and make delicious cutlets from them. Every week the cutlets had a delicious unique taste which was impossible to recreate.
Over the years I have overcome that problem and so we don’t have many leftovers these days. Last week, I made these stuffed corn parathas and had about a cup of the corn stuffing which was not enough to make a few parathas for the 2 of us. So, I used that leftover stuffing, a slice of leftover bread and few other ingredients to make these tasty corn cutlets for a quick evening snack. Like I said before cutlets with leftovers taste awesome and these were no different! 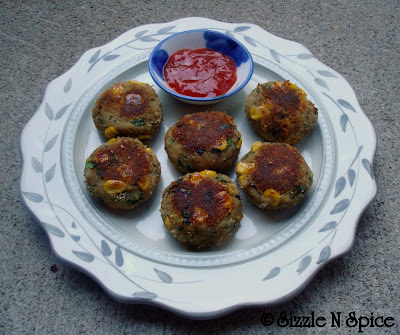 1. Take the corn stuffing in a bowl.
2. Mash the boiled potato. Dip the slice of bread in water, squeeze out all the water. Add the mashed potato and bread slice to the stuffing.
3. To this add green chillies, chopped cilantro, corn kernels, frankie masala/ chaat masala, lime juice and salt. Mix all the ingredients and knead well making sure there are no lumps.
4. Form small balls of the mixture and flatten them. Heat the skillet or tava.
5. Coat the cutlets with bread crumbs and shallow fry them in some oil. Fry both sides till they turn golden brown. Serve with tomato ketchup. 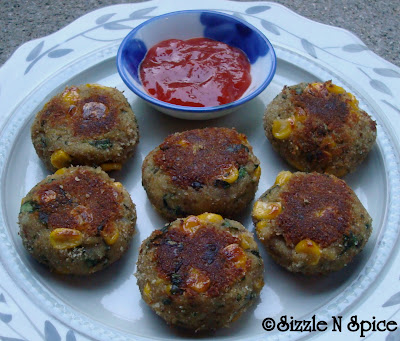 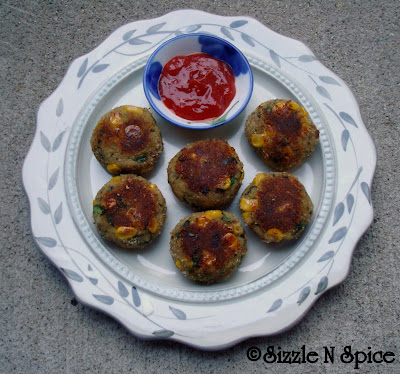 Also sending these to PJ's Scrumptious Delights From Leftover event.