skip to main | skip to sidebar

Apart from different Indian regional cuisines, if there's one cuisine I would like to explore, it is the Middle Eastern cuisine. With the similarity in spices and lentils, this food resonates well with the Indian palate and is among the favorites with the Desi crowd in the US.
Living here in MI, which has the largest Middle Eastern population in the US, we have access to several good Middle Eastern restaurants and grocery stores. So, naturally we frequent these restaurants and indulge ourselves in the mouth-watering falafels, shawarma sandwiches and of course the creamy hummus with warm bread straight out of the hearth oven. Hence I never attempted making any of these dishes at home. When I read about Nupur's Blog Bites #2 event, I knew what I was going to make. I found some of my favorite Middle Eastern delicacies on her blog itself and didn't have to look any further. Using her recipe as my inspiration, I decided to create a middle eastern feast in my own kitchen by preparing falafel, hummus, fatoosh salad and pita sandwiches for lunch last Saturday.
Falalels are small deep fried patties made from spiced ground chick peas or fava beans or a combination of both. This is a very popular street food in the Middle East and also in several other parts of the world where Middle Eastern cuisine has gained popularity. I also read somewhere, that falafels are so popular that McDonald restuarants in Egypt serve 'McFalafel' sandwiches which is equivalent to the Big Mac in the US.
I made quite a few changes to the original recipe. In addition to the chick peas, I also used fava beans. I substituted the flour with some bread crumbs and also added some garam masala to add an Indian touch to the dish. I'm not a big parsley fan, so I restricted the use of this herb only for garnishing and used fresh cilantro in its place. The falafels turned out exactly the same as served in any restaurant, in terms of the taste, appearence as well as texture. The deep-fried patties were crispy and crunchy on the outside and soft and delicious on the inside.
I bought a special falafel-making tool from a nearby middle eastern kitchenware store and it was a breeze to make uniformly shaped falafels with this tool. Basically, you hold the tool in one hand and press the spring button down with your thumb. Then with the aid of a small spatula, pile the falafel mixture into the tool, smoothen it out, and then gently release the button to drop the evenly sized patties into the hot oil. I really enjoyed making these with this tool. It was really nice of D to shoot a small video and thanks to Swara for the background music :-). I think the video will give you a better idea on how to use the tool. 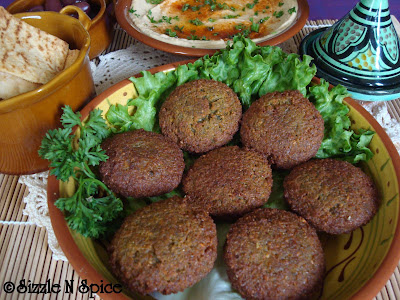 Method -
1. Soak the garbanzo beans and fava beans separately in enough water overnight.
2. Drain the beans and in the food processor, blend together garbanzo beans, fava beans, cilantro, onions, garlic, jalopeno into a coarse paste.
3. Place this mixture in a bowl and add bread crumbs, salt, cumin powder, coriander powder, garam masala, black pepper powder and mix well.
4. Sprinkle the baking soda and baking powder and mix. Let the dough rest for atleast 1 hr.
5. Form small balls of the chickpea mixture or use the falafel scoop to form even sized patties. See pictures and video on how to use the tool.
6. Heat oil in a pan and deep fry the patties 5-6 at a time in the hot oil. Fry on both sides until golden brown. Always fry1 ball in the oil to test. If it falls apart, add some more bread crumbs and repeat the process. 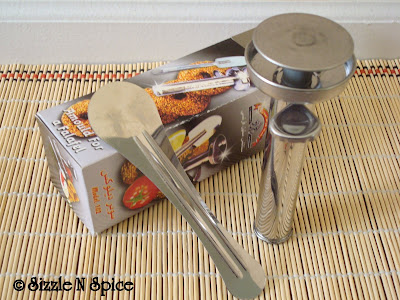 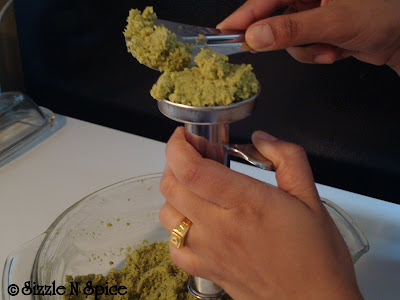 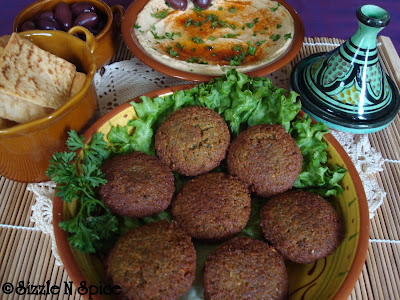 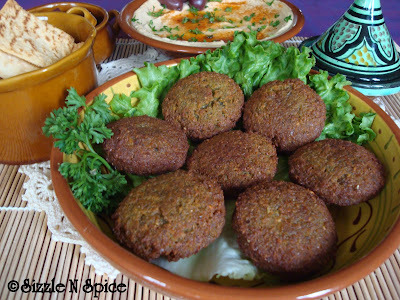 These are also going to 'My Legume Love Affair (MLLA)' event hosted by Ruchika for the month of April 2010.